A while back, Google took a big step to simplify their newsfeed experience with the revamped Google News Android app. It was one of the first apps to sport Google’s new Material Theme design, and even then, it has matured a lot since it first launched. One appeal of the app includes the “Full Coverage” feature, which provides you with a handful of sources from major publications on a particular topic so you can learn more about a news topic from every narrative and perspective possible. Google is now testing an option to get this Full Coverage to more people.

An APK teardown can often predict features that may arrive in a future update of an application, but it is possible that any of the features we mention here may not make it in a future release. This is because these features are currently unimplemented in the live build and may be pulled at any time by the developers in a future build.

In version 5.20 of the Google News app, Google is testing the ability to let you share the Full Coverage section of any news topic as a link. We’ve managed to activate this feature on our end, and a “share” button is now visible while checking out Full Coverages inside the app, which allows you to share that section with other users through Google apps or other third-party apps as a link.

The ability to share a link to the Full Coverage page of a story is a feature known internally as “Story 360”, and Google might be introducing it soon to end-users through a server-side update after it’s announced. The featured image shown at the top of this article is a graphic that we pulled from the latest APK, and Google will show this graphic to the user in the app to explain how this works. As of now, though, this feature is not available and we don’t know when it will be. Keep an eye on our coverage to know when this feature and the other features we recently found will roll out. 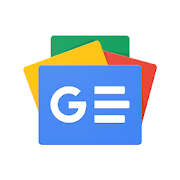